The Clintons? Again? Why?

Texan Molly Ivins was one of the savviest political reporters of all time. She once said (paraphrased) "As I survey the pack of sycophants in the Washington press corps, wriggling on their bellies to kiss the feet of those in power, I feel plumb discouraged about the future of journalism." Many syndicated pundits frequenting the Star-News pages are wriggling on their bellies to kiss Hillary Clinton's feet and crown her even before the election. They’ve conveniently buried the commodity market and land development scams the Clintons were involved in, the political favors she and Bill sold, and Bill's 140 pardons and 36 sentence commutations in the last hours of his presidency, including multiple felons who paid Hillary's two brothers huge sums of money to "represent" them. Marc Rich, who fled to Switzerland to avoid prosecution on tax evasion, was pardoned after his wife contributed $70,000 to Hillary’s Senate campaign and even more to Clinton's presidential library.

Just as many in the corrupt Bush administration are esca[ing punishment through obfuscation, lies, and withholdhing of documents, the powerful Clintons escaped though several of their partners went to prison. The Bush Administration has cooperated with the Clintons by refusing to release un-redacted Justice Department records regarding these matters claiming "executive privilege." If Bush is claiming executive privilege in behalf of the Clintons, one can only wonder if the widely held opinion that Hillary is indeed "Bush Lite" is corroborated by Bush's help in keeping their secrets under wrap.

It should also be mentioned that Clinton’s advocacy and passage of NAFTA was the beginning of outsourcing and the end for America’s manufacturing industry and many good paying jobs. Who wants the Clintons in the White House again...and why?
Posted by Stan at 9:27 PM No comments:

No sacrifice too great...

Presidential hopeful Romney, like all Republican candidates, vigorously supported sending more of our loved ones to Iraq. During his recent "Ask Mitt Anything" tour in Bettendorf, Iowa he was asked: "Are any of your five sons currently serving in the United States military and if not, are any of them planning to support the war on terror by enlisting in the United States Military?" Romney's answer was: "We have a voluntary army in this country." "There are a variety of ways you can show your support for our soldiers. My sons are showing support by trying to get me elected as the President of the United States." “My son Josh bought a Winnebago and is driving across the State of Iowa to get me elected." Romney wants OUR loved ones to go, but not his? Driving a Winnebago is fighting the “war on terror”? Romney avoided serving his country in Vietnam during the 1960s. He sought and received deferments through his church as a Mormon "minister of religion" for the duration of his two and a half years of "missionary work" in France and also sought and received nearly three years of deferments for academic studies. Just what we need in the White House...another chicken-hawk patriot for whom no sacrifice is too great...as long as it’s ours and not his.
Posted by Stan at 9:23 PM No comments:

Letter from Senator Burr regarding the OLF

Here's the letter I received yesterday from Senator Burr regarding his non-position on the Navy's plan to take 50 square miles of North Carolina land, destroy an avian wildlife management area, and use a poison with unknown effects on humans, our water supply, etc., to kill tens of thousands of migrating swans, geese, ducks, and other forms of life.

Thank you for contacting me regarding the Navy’s proposal to build an Outlying Landing Field (OLF) in Washington and Beautfort counties. I appreciate hearing from you on this issue.

My view has consistently been that I will not dictate to the Navy where it should train pilots so long as the Navy follows the law in its pursuit of land for training. I recognize the importance of the Navy‘s ability to train pilots as well as the need for proper environmental stewardship in North Carolina. 1 also believe that the process, designed to produce a decision on this issue, is working.

Washington and Beaufort counties sued in federal district court in Elizabeth City to stop the Navy from building the proposed OLF. After hearing from both the Navy and local citizens, lJnited States District Court Judge Terrence Boyle issued an injunction; prohibiting the Navy from any further planning and designing of the OLF. It was Judge Boyle’s assessment that the Navy had not properly completed tile environmental impact study for the possible OLF sites, and he ordered a supplemental environmental impact study be carried out.

The 4111 Circuit Court of Appeals later up held the injunction but ruled the Navy could resume land purchases from willing sellers and conduct more tests at the site. A draft of the Navy’s supplemental study (DSEIS) was released in February 2007. Following the release of the DSEIS, the Navy announced a 60-day public comment period for citizens to express their views. During this period, six public hearings will be held. A list of the times and locations of those hearing is attached to this letter. I believe the process is moving forward, and I remain hopeful that a mutually acceptable solution to this problem can be found.

I appreciate that you took the time to write to me about this very important issue. Please do not hesitate to contact my office if I can be of further assistance to you or visit my website at http://burr. senate.gov.

No one wants to keep the US Navy from conducting critical training. It just doesn't have to also destroy one of our most treasured and environmentally productive wildlife areas.

I urge you to call your Congressman and these two Senators and express your views. The links to their numbers is to the right and above on this page...under the heading of Useful Links. (
NC Congressmen Jones, McIntyre and Price have now stated their opposition to the OLF site. )
Posted by Stan at 6:44 AM No comments: 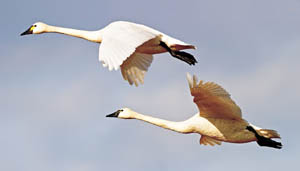 From the Charlotte Observer :
Outrage in the refuge - Interior Department gag order on OLF an abuse of power.

"The U.S. Department of the Interior has told its U.S. Fish & Wildlife Service employees in northeastern North Carolina not to respond to public inquiries about the effects of a proposed Navy practice landing field there. Any questions are to be referred to an office in Atlanta -- more than 500 miles away." Photo by Juan A. Pons

"Why this cockeyed scheme? It's "an effort to keep the public from knowing ... about the effects a proposed landing field will have on wildlife and the refuge," says Derb Carter, an attorney with the Southern Environmental Law Center. The field would be near the Pocosin Lakes National Wildlife Refuge, one of the East Coast's most important migratory waterfowl refuges."

"The field will endanger large birds that spend their winters feeding and nesting near the field. If the 15- to 20-pound tundra swans and the 5- to 12-pound snow geese collide with expensive F/A 18 Super Hornet jets, chances are the jets are going down. So are the pilots. A coalition of local governments, citizens and advocacy groups is working to stop the Navy from building this new facility in Eastern North Carolina. As part of a Pentagon push to find additional training grounds in the United States, Navy officials are intent on installing an "outlying landing field" (OLF) for squadrons of F/A-18 Super Hornet fighter jets based near Norfolk, Va. The Navy is moving forward with their plan to acquire 30,000 acres for the airfield in Beaufort and Washington counties, in land near the Pocosin Lakes National Wildlife Refuge. This will be one of the largest abuses ever of Eminent Domain.

There are places on this earth that are sacred, places where one cannot walk and not be struck by their beauty and a sense that these places are the cradle of our earth and whole species. The Pocosin Lakes region of Eastern North Carolina is such a place. It is the winter home to tens of thousands of geese, tundra swans and other birds - its estuaries and waterways a reliable feeding place and a safe harbor.

Now this region is at risk—chosen for its rare, quiet darkness along the Eastern Seaboard for practice drills in flight of an altogether different kind. It does not make sense that such a sacrifice take place. Further, after being caught lying and "reverse engineering" their environmental impact study the Navy was rebuked in three separate courts. Now the US Navy is coming back again to take these beautiful lands from us.

It's time to put a stop to this abuse of power. It's time to protect North Carolina's family farmers in Washington and Beaufort Counties. It's time to tell the Navy to find a better place for its outlying landing field. Please take action to block any future expenditures by the US Navy related in any way to the pursuit of Site C. The pleas of interested sportsmen and environmentalists in SE NC and throughout the state have fallen on deaf ears.

We've had either no response or no help from Congressman Mike McIntyre or Walter Jones or Senators Dole and Burr. This is not responsive government!

My Choice for our next President. Go here (ISSUES) for information on his plans to change our nation and the world into a better place.

A great day on the ICW

The Populist Party formed in 1892 to represent common folk against government ruled by the interests of big business seeking unbridled profits achieved by paying low wages, managing crop prices downward, charging exorbitant fees and interest rates, and by buying political and judicial favors. The Populist’s declaration of principles said in part...."We meet in the midst of a nation brought to the verge of moral, political and material ruin. Corruption dominates the ballot box, the legislatures, and even the ermine of the bench. Newspapers are largely subsidized or muzzled...public opinion silenced....the fruits of the labor of millions stolen to build fortunes for a few." Sound Familiar?